Thank you to Disbury Creative for designing the logo.

If you would like early access to new features to help test them and report possible problems in Interval Recognition - please download the Beta Version from Google Play.

The following melodies are used in this app to help identify intervals by associating them with a melody you already know. I welcome song suggestions. 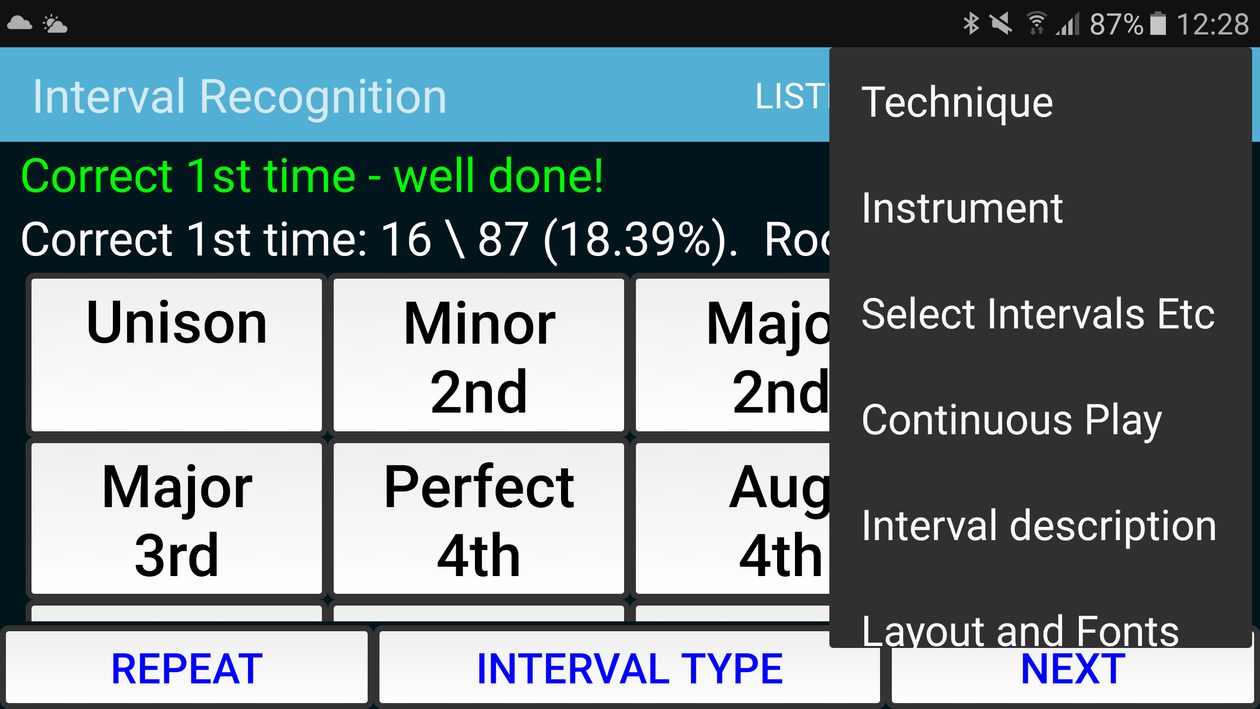 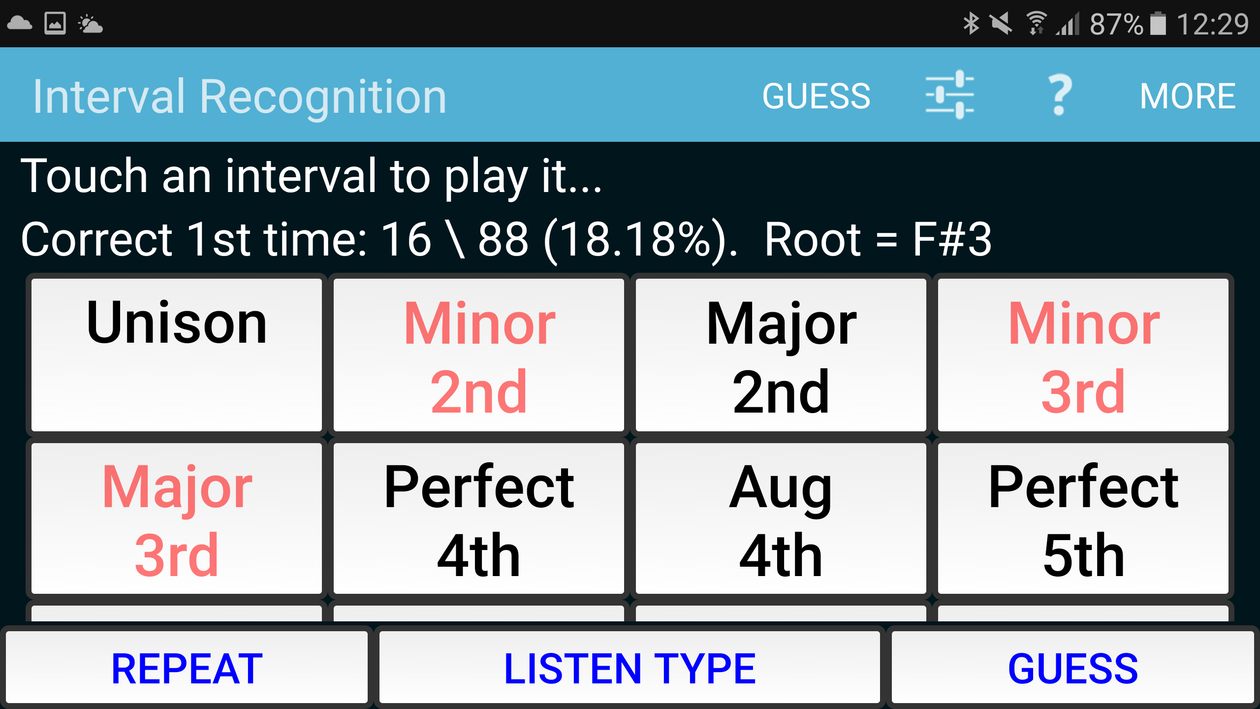 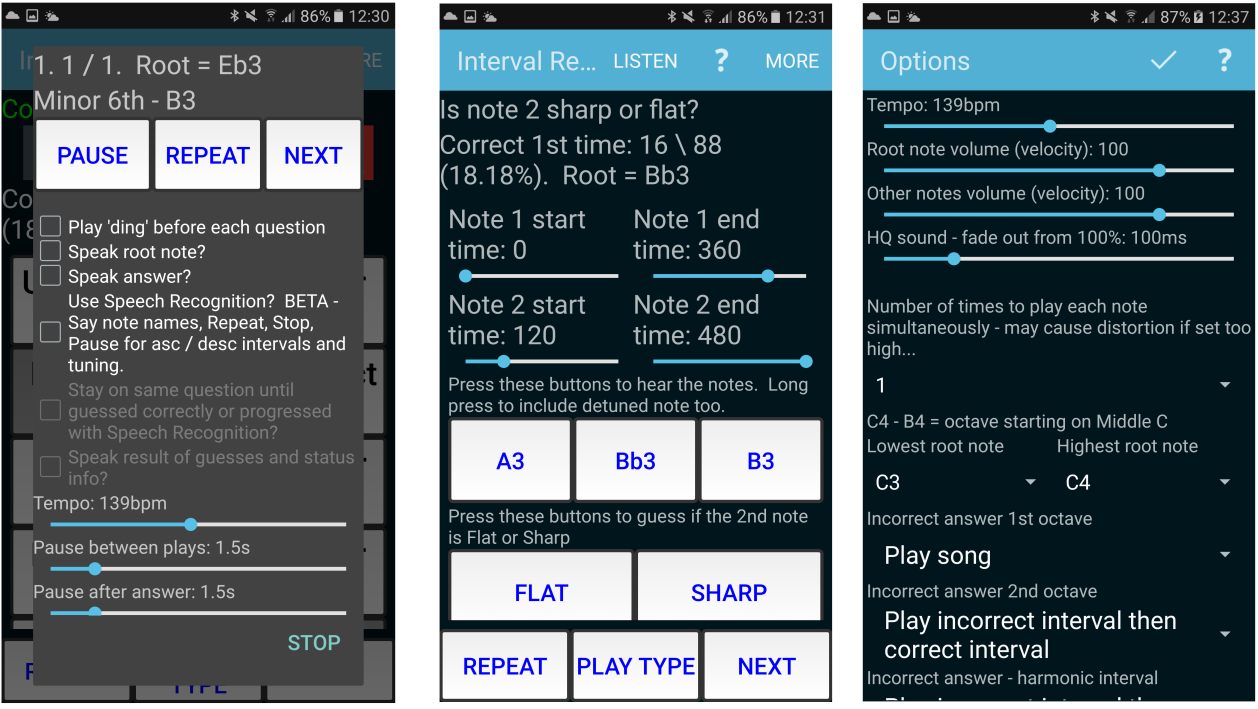 How to use Interval Recognition

Press the Question Mark button ('?') on the Action Bar or Menu -> Contextual Help to show information about the current Technique / screen. There are Breadcurmb links at the top of each page and links within the text to navigate between help pages.

This app has a lot of options and features to enable you to learn in the way you find easiest. A lot of these features are demonstrated in the video at the top of the page. Please do contact me if you have any questions or feature requests.

Basic Use:
Listen / Guess:
Songs:
Options:
What does speech recognition understand in Continuous Play?
Speech recognition in Continuous Play is not yet finished and will be improved in both accuracy and in the number of things you can say to it. It can currently only be used for ascending or descending intervals and supports:
Error Codes:
If these errors or any other problems persist, please contact me with a description of the problem, any error messages and the model of your device.

I have had some requests to translate this app into other languages - something I never imagined would happen when I started writing it - so Thank You. I then received offers from users to help with the translation - so Thank You again!

Android apps handle localisation by each language having its own file and each piece of text having a unique name; thus every translation of the same phrase shares the same name. Translations can also use arrays (which are like lists) to group similar items - eg the first position of a list called 'Interval Names' will be the word for 'Unison' in the required language.

Even I was a little surprised at how much text this app uses. So I thought the best solution is to make the translation a collaborative effort whereby individuals can translate whatever parts they wish.

It contains a separate sheet for each language. Sheets are named by their country code and language - please make sure you update the correct one! The 'en-english' sheet cannot be edited and is referenced by all the other language sheets - thus the first four columns are exactly the same for all languages and the phrases are in exactly the same order for each language. Please contact me if you would like me to add any other languages.

Thank you for your help! The app does not read directly from the Google Sheets file - new translations should be included in the next update.

Become a beta tester for early access to new features by joining the Open Beta on Google Play.

I am an individual developer working on this app (and others) in my spare time. Thanks for using / considering this app - I hope you find it useful.

From the 'Layout and Fonts' screen you can choose either Banner or Interstitial ads. If Banner ads are selected and there is no internet connection, the layout will automatically adjust and not waste space with blank adverts.

The Donate version does not display adverts but contains essentially the same code and references the AdMob library - but ads are not loaded or displayed.

This app uses Google Firebase Analytics to give me an idea of how many users the app has, what features are popular and how long the app is used for.

This is a unique (but user-resettable) string - similar to a cookie.

The Android Advertising ID is user resettable from the Google Settings.

This app uses Google Firebase Crashlytics to report crashes. This will provide me with a stack trace (details of what line of code caused the crash and how the app got to that line) - which I will use to understand the problem, try to replicate it and hopefully fix it.

Along with the stack trace, I also receive some device information - eg device model, language, OS version, app version etc. This helps me understand the reason for the crash.

I welcome comments and suggestions - it is encouraging to hear from users - thank you. If you choose to contact me, I will try to reply in a timely manner. I will most likely contact you again some time later when I have released an update or to let you know about progress relating to your original question. I will not pass your details on to anyone else.