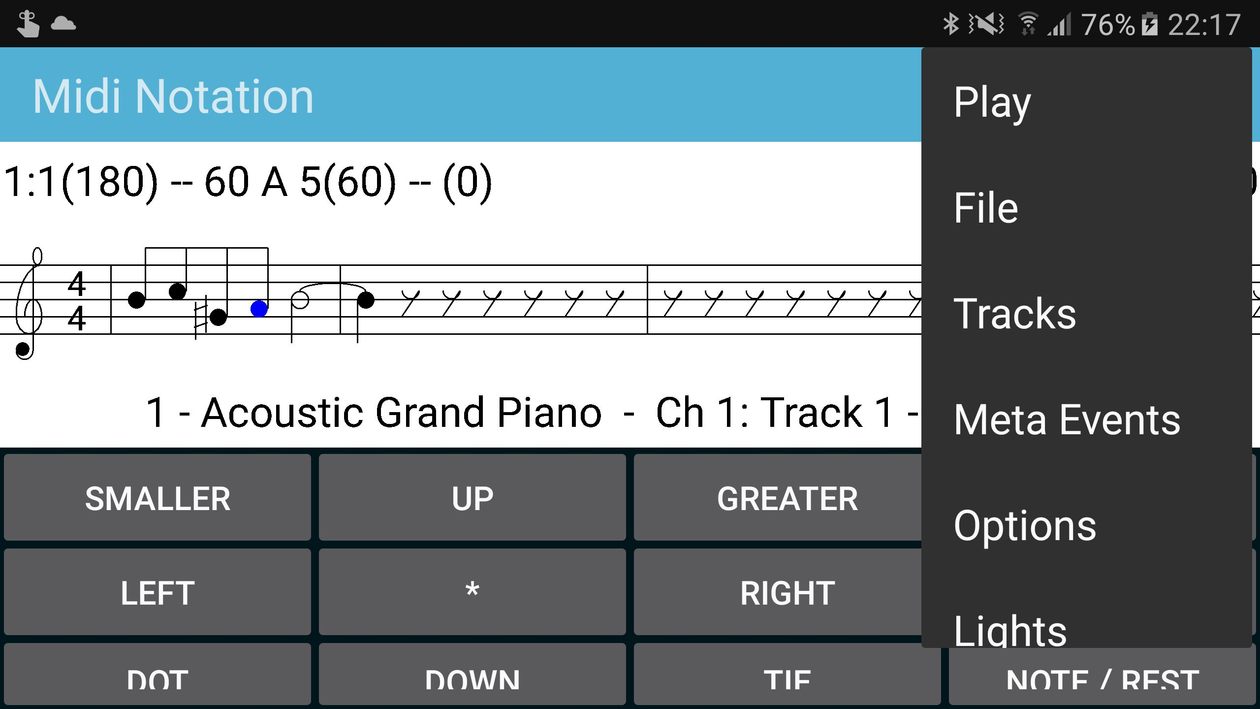 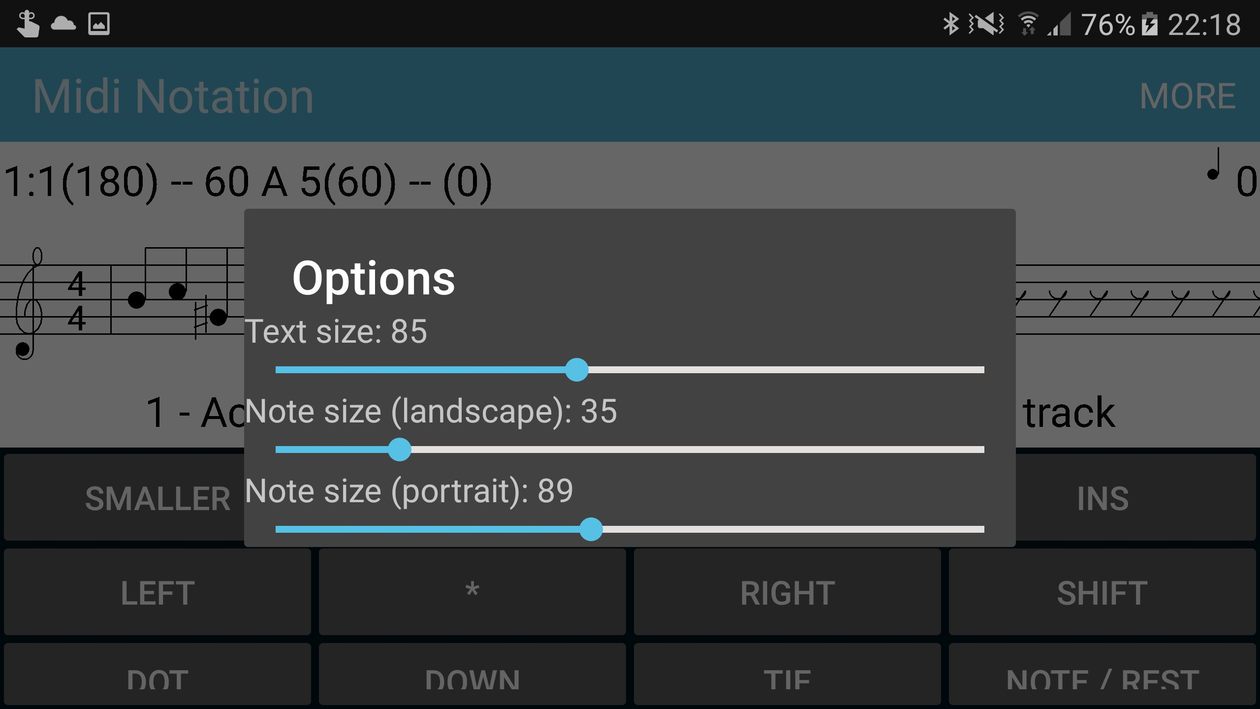 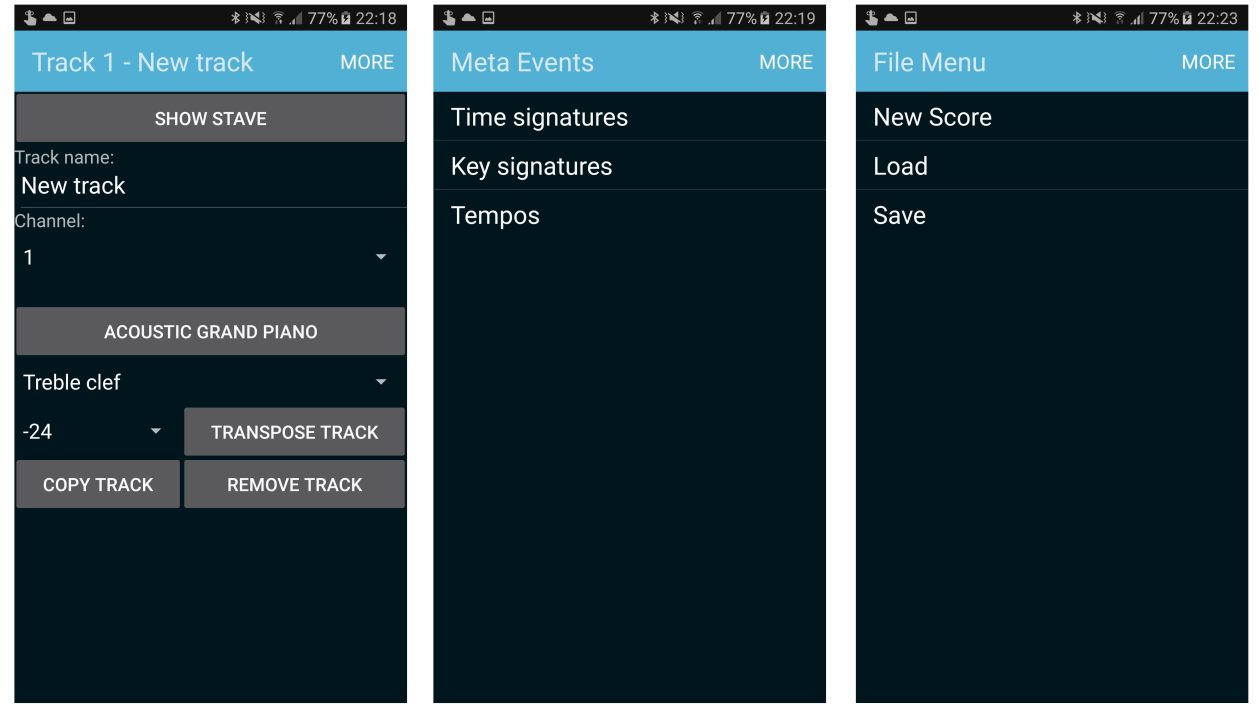 This application allows music notation to be created on an android device. Load / view / edit / save midi files. Have you ever wanted to write down or listen to a musical idea eg on the bus or train but you don't have a piano with you?

Or have you ever been practising and wondered how a particular rhythm should sound? Or have you ever downloaded a midi file to your phone to help with learning a song and wanted to view the notes?

Like a standard sequencer, files can have multiple tracks, use midi instruments, change time signature (simple and compound time), key signatures and tempo.

Unfortunately I have not had time to perfect this app - it won't always work as expected. Some rhythms, chords and quantising may be a bit broken by some events like pitch bend... Having said that - it works enough for me to have found it useful so it stands to reason that other people might find it useful too. It is not quite Sibelius or Cakewalk or Cubase for the mobile phone - but it is a start!

On the right of the screen is the Note Duration Indicator - this can be made smaller by pressing "Smaller" and made larger by pressing "Greater" and can be applied to the currently selected note (not rest) by pressing *.
To the right of that is the Insert Mode Indicator. 0 is normal and pressing left or right will just move to the next note. 1 allows notes to be inserted at the same time as the currently highlighted note ie a chord is created when pressing right. 2 moves the starting position of the currently highlighted note. Did I mention those bugs earlier? Less bugs will be encountered if you just create monophonic melodies on each track...

Under these are the controls.

Up - Move pitch up 1 semitone - or 1 octave if SHIFT is applied. Applies to highlighted note and all selected notes.

Left - Scroll currently highlighted note to the left one note, or 1 bar if SHIFT is on. During playback, left cycles the currently viewed track.

* - Apply value of Note Duration Indicator to the currently highlighted note (not rest).

Right - Scroll currently highlighted note to the right one note, or 1 bar if SHIFT is on. During playback, right cycles the currently viewed track.

Dot - Add or remove a dot (adds half to the duration) to the currently highlighted note (not rest).

Down - Move pitch down 1 semitone - or 1 octave if SHIFT is applied. Applies to highlighted note and all selected notes.

Tie - Add or remove a tie to the currently highlighted note if musically correct.

Shift - Toggle SHIFT on and off.

Note / Rest - Toggle the highlighted note between a rest and a note.


The musical score can be scrolled left and right and moved up and down to make ledger lines easier to see by dragging with one finger.

Menu -> Lights - was used to sync my Christmas Tree to the scrolling score as it plays. Enter an IP address and port to connect. When playing byte value 16 represents a rest. Each time the pitch changes the byte values 17, 18, 20 or 24 will be sent sequentially. Let me know if you make anything fun with this.

I do not recommend overwriting midi files because not all data is parsed, and some is parsed incorrectly thus the saved file may be substantially different to the original file. I welcome any comments / feedback / feature requests / pestering to make it work properly...

Android Midi Notation requires Internet Permission to use Bugsense crash reporting and Google Analytics. This music writing application does not require internet permission for normal functionality and will work without it.

To install Android Midi Notation, either download directly via your phone's web browser or download it to a computer and use Bluetooth or a cable to transfer it to your phone. You may have to allow the installation of 3rd party apps.